The use of portable magnetoencephalography (MEG) in epilepsy

This project aims to develop and use a novel, state-of-the-art form of electrical brain recording called portable Magnetoencephalography. This will likely be able to record abnormal epileptic activity with much greater accuracy, and clarity than present methods, so greatly facilitating the identification of areas of brain region causing the epilepsy. This has the potential to revolutionise the assessment of people for epilepsy brain surgery.
Dr Umesh Vivekananda

An important tool in the diagnosis of epilepsy has been the electroencephalogram or EEG. Although EEG provides useful information about abnormal electrical brain activity caused by epilepsy, it is limited by its accuracy in locating precisely which area of the brain is producing the abnormal activity. EEG signals are also affected by muscle twitching and movement of the patient, which significantly compromises recording of seizures. Magnetoencephalography or MEG is another form of brain recording, superior to EEG in localising abnormal activity. Moreover MEG signal is only minimally affected by muscle movement or motion.  However use of MEG is significantly compromised by the fact that the patient’s head has to be fixed in the scanner, which is contained in a specially shielded room. Moreover, present MEG systems are so costly that there is limited availability. Dr Vivekananda and colleagues aim to introduce a novel MEG technique (portable MEG) that uses sensors worn within a helmet, so that patients can move freely.

The researchers aim to directly compare scalp EEG and portable MEG in patients with two common forms of refractory epilepsy (i.e. epilepsy that does not respond to medication): focal cortical dysplasia (an abnormality of brain development) and hippocampal sclerosis (scarring deep within the brain).  In particular, they will look at an abnormal electrical signature of epileptic activity, interictal spikes, which occur between seizures. They will compare the success of both methods at finding these spikes and localising where they come from in the brain.

Although MEG has thus far been used in limited epilepsy scenarios, portable MEG has the potential to revolutionise how neurophysiology is performed in epilepsy and translate MEG into a widely used clinical tool. Portable MEG is significantly cheaper than existing MEG systems and as the technology continues to develop, prolonged MEG telemetry where patients can move within their environment will be a possibility. 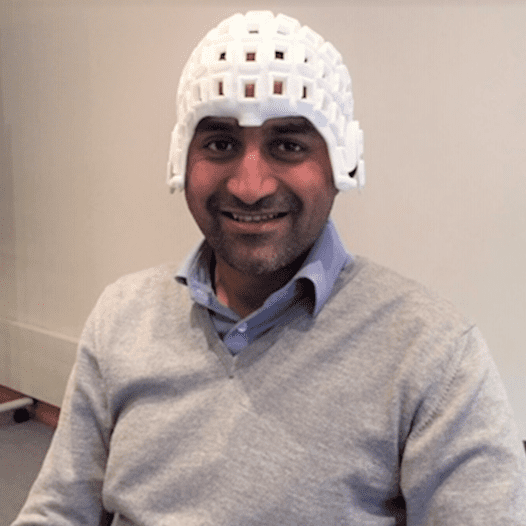