A charity bowling night was held at Tenpin Bowling Exeter which raised a fantastic £518.13 for Epilepsy Research UK.

The event was organised by Dave Rawlings from Cotleigh, East Devon. He is running both the Great West and Great South Runs in October, clocking up a total of 23 miles in just over a week. He’s also taking part in next year’s London Marathon too.

It’s all in memory of his daughter’s close friend who passed away five years ago. Toby was just 26 when he died after having a seizure in his sleep. He wasn’t even aware he had the condition.

“Last Wednesday night was fantastic. We had 9 teams competing at Tenpin Bowling Exeter, and we also had some great prizes to give away in our raffle, with gifts donated from Seaton Tramway, Homebase, Radio Exe and Kevin & Gill Goss. In total we raised, £518.13.

“Now my attention turns to the running. This weekend I’m taking on the Great West Run, followed by the Great South the week after. I’ve also had my place confirmed in next year’s London Marathon. Having broken my leg in a skiing accident in 2012, the next six months are certainly going to be tough, but it’s all for a good cause.

“Toby was completely unaware that he had epilepsy, and this cruel condition took him away in the middle of the night while he slept. Epilepsy Research UK is trying to fund a cure to stop others going through what Toby did.” 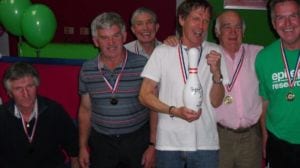