This time last year my older sister Millie and I were just completing our final year university exams and beginning to face the reality of launching ourselves into the ‘real world’. Before we could do this though we still had one or more challenges to face! Our third year studies were, like most students would agree – a challenge in themselves. There were many long days/nights in the library, constant deadlines and ever increasing reading lists. However we decided it was a brilliant idea to study alongside raising money for charity, well five charities, of which Epilepsy Research UK was one.

In the summer of 2012 Millie and I, along with our parents Mel and Paul decided to undertake a year of fundraising to mark a number of occasions in our lives. We chose to fundraise for five charities that have all touched our family life. The way we were going to fundraise was going to be varied, there were to be 50 events and challenges, some big and some small over one year. Spanning over the year from July 2012 to July 2013 the four of us did various activities, ran events, participated in events, learnt new skills and raised over £24,000 in total thanks to the amazing support we were shown from friends, family and complete strangers.

Over the year we did many a weird and wonderful thing, our opening event was a 24hour tennis marathon, following that we participated in various other sporting challenges, Millie cycled from Coast to Coast on a tandem and completed a swicle, while I took on the challenge of the three peaks and coerced 3 of my house mates to do it with me, then entered my first triathlon and braved the icy sea to swim in an open water race. Over the year the four of us walked and cycled miles of British and Scottish countryside. Some of our challenges were small such as giving up alcohol for a month and having a swear jar or posing as mannequins in a shop window for a day. Others were large, we held events for lots of people to get involved in such as sports days, orienteering events, fashion shows and a home sale. Perhaps some of the more odd things we did were completed whilst studying at the same time,Millie spent a week wearing a giraffe onesie to every lecture, tutor meeting, supermarket dash and birthday party that she had scheduled that week! My housemates and I each lived off £5 for a week for food. On top of this we decided to give up Christmas and instead worked in a soup kitchen for the day and went swimming in the sea on Boxing Day. All in all between the four of us we had a very busy and rewarding year doing many very different things.

Millie and I were initially skeptical as to how we may balance the time and effort required to complete a challenge almost every week of the year alongside our studies but it actually was amazing to have something that wasn’t an essay deadline to focus on. It burst the university bubble and made us get out and actually do things rather than just talking about doing them. We learnt so much about ourselves and other people too. It is great to have had such an amazing experience through which we learnt lots of new skills that will help us as we launch ourselves into the next stage of our lives. We impressed ourselves and managed to raise a whopping £24,000 for our charities.

It was certainly a year to remember! 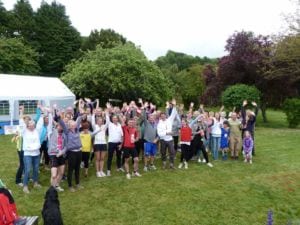 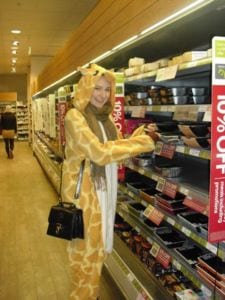