Simon and Toby Moseley have just returned from trekking up Mt Kilimanjaro to raise funds for Epilepsy Research UK.  Simon tells us why, and about the challenge here:

“My son Toby has had Petit Mal epilepsy since he was eleven years old and whilst now 31 and a strapping 2 meters tall playing rugby and skiing, he still has episodes monthly. Despite this, he co-manages a prestigious public house in Salisbury, is a talented landscape designer and is now an author of historical fiction!

Toby and I returned from Africa on Saturday. Firstly, thank you all for your generosity for supporting Epilepsy Research UK. You have been extremely kind and supportive. We have already exceeded our original aim and we will keep the fund open until the end of September.

We reached Uhuru Peak, the summit of Mount Kilimanjaro, at 7.10 am on Thursday morning after a final ascent of 1200m during darkness, in time for sunrise over Mawenzi, one of the three peaks of Kilimanjaro. We spent the preceding five days climbing to High Camp, our final position before reaching Uhuru, experiencing diverse environments from tropical rain forest to alpine desert and glaciers, all the while acclimatizing to the altitude. After reaching the summit we descended in a day and a half. It was a real adventure throughout and great that Toby and I were able to attempt it together and keep a smile (just!) on each other’s faces at the various down times!

We were a part of a 10 person group lead by an experienced British expedition leader and Tanzanian guides who were exceptional in keeping the team motivated and prodding us along when we needed it. We maintained a good speed of ascent and whilst we each suffered at various times from the effects of altitude all the the group reached Uhuru Peak successfully. We were very ably supported by a team of 30 Tanzanian porters – without the logistics executed by the latter success would have been more difficult to achieve.

Below we show you some of the highlights of our climb. Coincidently one of the other Trekkers was a researcher focused on epilepsy research and so was over the moon about the fund’s progress, thank you so much – we can assure you we both felt a large responsibility to complete the climb through your support! ”

Simon and Toby have so far raised almost £3,500 through their climb and we are hugely grateful for their fantastic support! 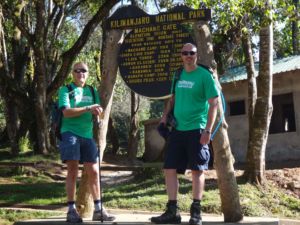 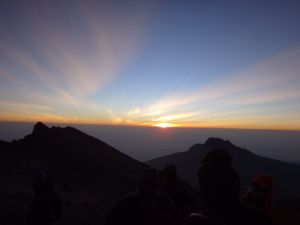 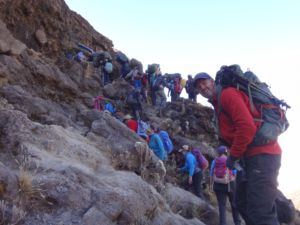